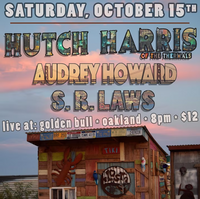 HUTCH HARRIS was the lead singer and primary songwriter of post-pop-punk legends The Thermals (2002-2017.) In fifteen years the band released seven LPs on the labels Sub Pop, Kill Rock Stars and Saddle Creek. In 2019 Harris released his solo debut LP Only Water, an introspective and meditative collection of songs exploring love and loss. Harris recently released his second solo LP Suck Up All the Oxygen.

AUDREY HOWARD is an indie-rock-folk-singer-songwriter audio engineer living in the Bay Area, CA.

S.R. LAWS is an American singer/songwriter, musician and recording artist from Northern California. Inspired by storytellers like John Hiatt, Rodney Crowell and Chuck Prophet filtered through early life experiences wandering the train tracks through wheat fields and smelling the fruit ripening in the orchards in his hometown.

S.R. cut his teeth as a songwriter in Austin, Texas. The “live music capitol of the world” and a thriving music scene yielded a bounty of musical and life experiences like no other. Each passing season allows provisions of a burgeoning sound peppered with wry attitudes and energetic rhythms to develop “lyrical pictures,” showing the humanness in the common walks of life. It is through heartfelt performances that allow him and the characters in his songs to “break the ice” with any toe-tapping crowd.

You can find him performing all over California and with his band The Heartsleeves.

His new release “A.M. Sessions” is out now and available at his live shows and on all platforms!